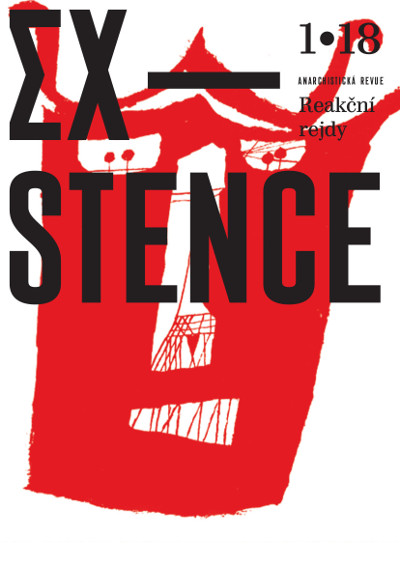 Last year the winter edition of the anarchist revue Existence was delayed by a month due to the preparation of its new graphics. This year we are two months behind because we simply took our time and didn’t rush the process. Because of this delay there are only going to be three editions this year instead of the usual four, but we believe our readers will not hold it against us.

But now to the content of this edition. Thematically it continues from some other editions, which were about repression, militarization and fascization of society. This time we framed these questions around the theme of reaction politics and its manifestations. In the introductory text we start from the hopes of new movements of 2011 and gradually see as the political mainstream turns the other way. We look at the deterioration of the left, processes, which lead people into the arms of populists and conservatives. We also look at the reactionary fight against globalism, which is the complete opposite of our slogan from the end of the 90s: “global solidarity against economic globalism”.

We look at manifestations of nationalism and new forms of authoritarian politics in central Europe and we comment on the often bizarre program points of political parties that have entered the Czech parliament last year. But don’t just stay at home, we explore the situation in other parts of the world. In this edition we bring you an excerpt from the Matthew N. Lyons book Insurgent Supremacists: The U.S. Far Right’s Challenge to State and Empire. It is a fairly detailed look at the starting pints, currents and future heading of the American, so called “alternative right”, which has become vocal after the election of Trump as American president.

The theme of nationalism is also reflected by our anarchist friends from eastern Europe, Mikola Dziadok from Belarus in his brief commentary and Tyler from Ukraine in a topical interview. Peter Gelderloose then gives his take on the vote for Catalan independence from the Spanish state.

But there is much more in Existence. We went far into the past to find the first ever documented strike, which took place 3184 years ago in Egypt. As far as the history of the anarchist movement is concerned, you can read about post-war France and witness the ideological disputes among anarchists then, or find out about the campaign against the anarcho-syndicalist trade union CNT when 40 years ago a bomb attack took place in Spain, and the culprit was a police provocateur.

An interview with the Russian political refugee Dmitriy Buchenkov brings us back to the present, he faces a potential punishment for joining a protest against Putin. And because the Russian repression apparatus never sleeps you can also find out details about the police-fabricated revolutionary organization.

As always there is an overview of events of the anti-authoritarian movement in Czech republic, including a report by a member of a squatting collective which for several days occupied an empty building in Prague. Finally you can read texts of the street newspaper A3 and a review of the history of radical ecological activities Tmavozelený svět and the punk zine Cerelitida.