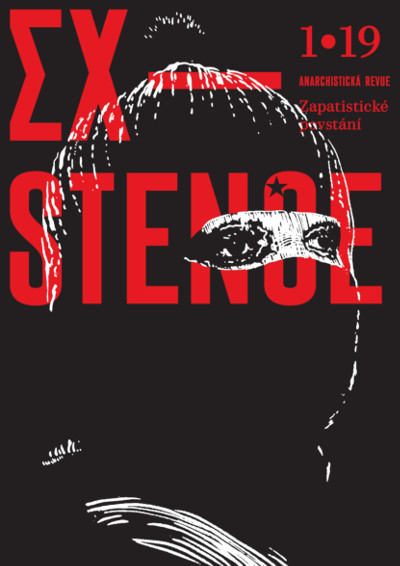 In its winter issue of 2019, the anarchist review Existence has set out for Mexico. We are remembering the 25th anniversary of the Zapatista uprising. However, this is not a historic topic as was the case with the previous issues dealing with the Russian revolution of 1917 and the turbulent year of 1968. The Zapatista movement certainly hasn’t been defeated, even though the rulers in Mexico have been definitely trying hard. Therefore, we dedicate this issue to a living movement which has experienced a dramatic development and whose inner vigor is far from slackening off. Furthermore, it promotes principles that anarchists generally see as their own or that are very close to their own views.

While preparing this topic, we have obtained essential assistance from the cooperative collective Black Seeds which engages in distributing coffee from Zapatista cooperatives. And indeed, this very coffee and the cooperatives participating in its production, processing and distribution – be it in Chiapas or in Europe – is the topic of one of the texts. Besides, Black Seeds has prepared the translation of an article by Leonidas Oikonomakis, editor of the magazine ROAR; it deals with the creation of EZLN, reacts to the criticism from the traditional left and analyzes both the Zapatistas‘ achievements and their ideological foundations. We have also done an interesting interview with the cooperative’s members. The interviewees don’t just focus on their own activities; they also speak about their trips to the Zapatista territory and its cooperative coffee plantations; they describe the contemporary problems of the Zapatista uprising and make comments on revolutionary tourism. One of the interviewees has talked to us straight from Chiapas and the information he provides is among the most topical at hand.

To ease your orientation, we have prepared a brief timeline of the most important events of the Zapatista movement as well as of the violent counteroffensive it has always been facing. „Slowly, but forward“ is the title of an article that – drawing from the book Compañeras by Hilary Klein – deals with the struggle of women for equality that has become one of the most conspicuous features of the Zapatista movement. Even though it is a revolutionary step forward, there is still a lot of work to do. The article also makes us think about our own shortcomings in this area and is complemented with the portraits of four eminent Zapatista women. The issue’s main topic then concludes with a survey of information campaigns, protests and solidarity events supporting the Zapatista uprising that have taken place in Czechia since 1994.

Beside the main topic, we bring a sample from the Czech translation of the book Anarchy works by Peter Gelderloos, dealing with the notion of justice, and an article about the organization CRIBS whose aim is to give shelter to refugee women in Greece who are either pregnant or with a new-born child. In the section „History of the movement“, a text by Vadim Damier takes us to the year 1919, first to the Hungarian Soviet Republic, and then to the revolutionary syndicalist struggles in Peru. The story of the Buddhist priest Gudo Uchiyama shows us how „religion“ and anarchism met in early 20th century Japan. What follows is the personal testimony of an anarchist leaving the fold of the Roman Catholic Church; it casts new light on the old concept of anarchist anti-clericalism. As far as culture is concerned, we bring an interview with the members of the multiartistic platform BIMB. As always, the issue also contains a survey of the activities of the domestic anti-authoritarian movement, news from the Anarchist Federation, the texts of the wall newspaper A3, and a number of reviews of books, graphic novels and zines.